In 2017 Mike and Richard decided to lead us in reverse direction on the Wysis Way, 55 miles,

in spite of saying they would not  lead another Long Distance Walk after completing the Ice Cream Walk in 2014.

Wysis is an invented word derived from Wye to the Isis (as the Thames is called on Oxford). Perhaps we should have called it the Siswy walk!

Walk 1 Lechlade to Bisley via Sapperton and Oakridge

Walk 2 Bisley to Gloucester via Bulls Cross and Painswick Beacon

Walk 3 Gloucester to Taynton via Tibberton

Walk 4 Taynton to Speculation via May Hill, Mitcheldean and part of the Forest of Dean

Walk 5 Speculation to the Wye at Monmouth via Near Harkening Rock, the Suck Stone and The Kymin

On 9 November 2013 we started doing The Ice Cream Walk over 12 months.

This is an 80-mile-walk starting at Winstones on Rodborough Common, heading south towards Bradford on Avon, then following the Mendips to finish on the beach at Uphill near Weston-super-Mare. The object of course is to have an ice cream on every stage. See our photos:

On Saturday 7 September 2013 a group of walkers from South Cotswold Ramblers completed a trek of the 100-mile-long Gloucestershire Way. The choice of route was influenced by local poets, particularly Ivor Gurney and FWHarvey who provided its theme of "Forest and Vale and High Blue Hill".

It commences in Chepstow, crosses the county via May Hill and Crickley Hill to Stow-on-the-Wold, then doubles back through Winchcombe to Tewkesbury where it finishes at the Abbey.

Our walk was completed in approximately 10-mile-long stages over about 18 months, and the picture above shows usat the end of the walk outside Tewkesbury Abbey. 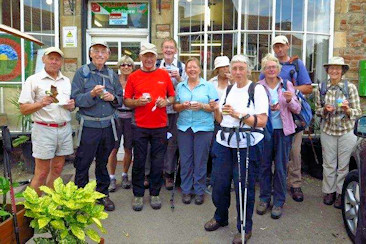 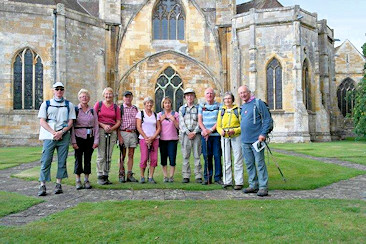